Now that we are back on-line…. I think there is no better way to kick off the return of GayPatriot with a statement supporting freedom of speech.Â  (h/t- Michelle Malkin) 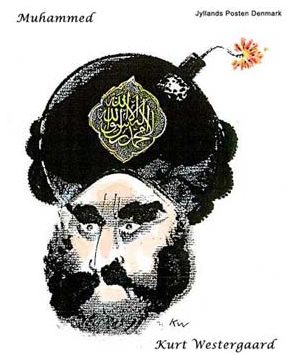 We are proud to reprint the Mohammed Cartoon as a show of solidarity with Denmark and the cartoonist who faces death by Islamists.

The reported target of the alleged plot was Kurt Westergaard, one of 12 cartoonists commissioned by the Jyllands-Posten newspaper to produce caricatures of the Prophet Mohammed two years ago.

Westergaard’s cartoon, which was reprinted by Jyllands-Posten today, was seen at the time as the most controversial, as it depicted the prophet with a bomb in his turban. â€œThe security service has not wanted to run any risks and chose to act at a very early stage,â€ Jacob Scharf, Denmark’s police intelligence service chief, said. â€œTonight’s operation has been a preventive measure.â€

I shall not submit.