My apologies for a somewhat delayed posting.Â  On Friday Night PatriotPartner, PatriotMom and I trekked to the Charlotte Bobcats Arena (Ooops!Â  Now the TimeWarner Cable Arena!) to hear two of the titans of today’s country music:Â  Keith Urban & Carrie Underwood.

The concert was great although Carrie’s portion was a bit weaker due to what seemed to us to be a sound-mixer not doing his/her job; Carrie’s voice was drowned out by the very LOUD band supporting her.Â  It wasn’t her voice because when the slower songs came on (lower background music), that velvety voice of hers filled the Bobcats Arena.Â  She also came out later to duet with Keith Urban and they both sounded great.Â  I’m kinda ticked because while Partner & Mom are more Keith fans than I, I was REALLLLY looking forward to hearing Carrie.Â Â  I guess there will be a next time.

Here are some pics from the show.Â Â  I’ll upload a couple videos later. 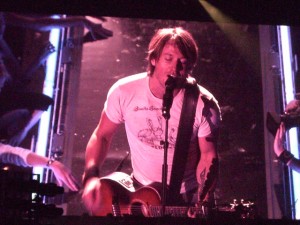 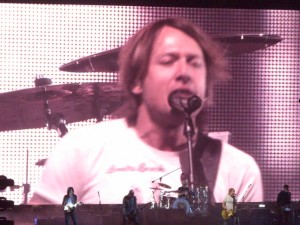 By the way, there’s nothing much to say about Keith Urban’s performance.Â  He was flawless, a great performer, awesome voice, and nice T-shirt!