I’ve asked this question before, and I guess I’ll have to ask it again….

Rex Jameson bikes and swims regularly, and plays tennis and skis when time allows. But the 5-foot-11, 180-pound is lucky if he presses 200 poundsâ€”that is, until he steps into an “exoskeleton” of aluminum and electronics that multiplies his strength and endurance as many as 20 times.Â  With the outfit’s claw-like metal hand extensions, he gripped a weight set’s bar at a recent demonstration and knocked off hundreds of repetitions.Â  Once, he did 500.

“Everyone gets bored much more quickly than I get tired,” Jameson said. 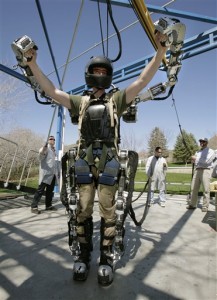 Jamesonâ€”who works for robotics firm Sarcos Inc. in Salt Lake City,which is under contract with the U.S. Army â€”is helping assess the 150-pound suit’s viability for the soldiers of tomorrow. The suit works by sensing every movement the wearer makes and almost instantly amplifying it.

The Army believes soldiers may someday wear the suits in combat, but it’s focusing for now on applications such as loading cargo or repairing heavy equipment. Sarcos is developing the technology under a two-year contract worth up to $10 million, and the Army plans initial field tests next year.

But the technology already offers evidence that robotics can amplify human muscle power in realityâ€”not just in the realm of comic books and movies like the recently debuted “Iron Man,” about a wealthy weapons designer who builds a high-tech suit to battle bad guys.

Or… to kill all of the good guys.Â  CALLING SARAH CONNOR! PICK UP THE PHONE PLEASE!