From GayPatriot Back Injury Central, the Presidential Debate is about to begin and I’m liveblogging under the influence of some strong stuff. 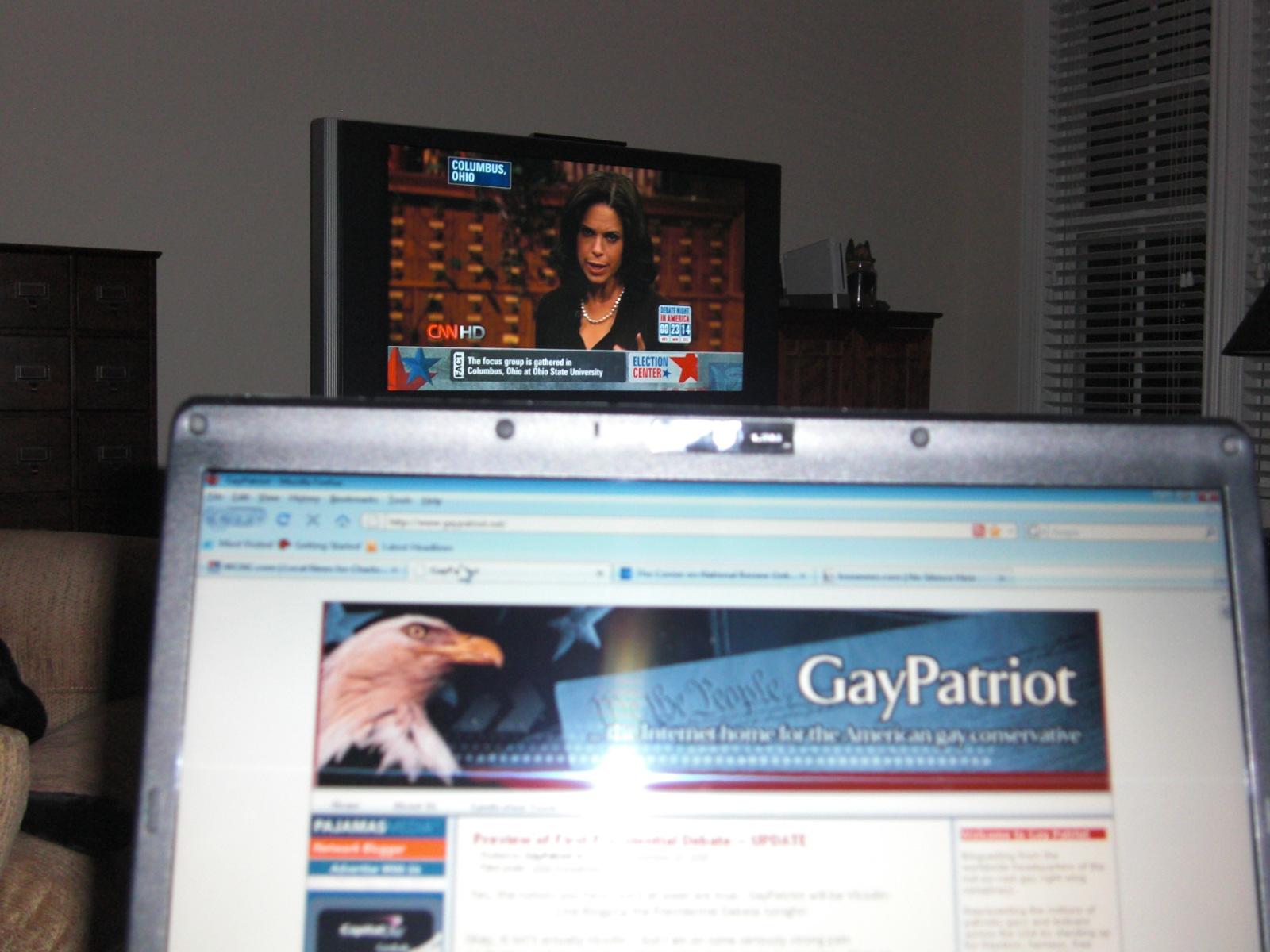 9:02 PM – Jim Lehrer is now giving the intro and the rules.Â  Is it just me, or do his wide, glassy-eyed gaze make him look as stoned as I feel?

I almost forgot!Â  My Pajamas Media colleague, Steven Green from VodkaPundit, is drunkblogging at Pajamas Media.

9:06 PM – First question about the Economic Meltdown of 2008.Â  Barack spews out the same talking points he’s been regurgitating all week.Â  Took a shot at blaming the whole mess on McCain and the GOP.Â  Bill Clinton would disagree.

9:08 PM – Good deal with McCain explaining the Bailout and also for bringing up the need for energy independence.

9:10 PM – McCain is going heavy on the need for accountability in Washington & Wall Street.Â  Those of us watching on CNN are being shown a real-time graph of a focus group in Ohio.Â  I am noticing something interesting so far — when McCain answers, the Independents are frequently scoring above Republicans and Democrats.

9:15 PM – Question is about the differences of approach to governing the economy.Â  McCain comes out hard on opposing earmarking and points out the Obama has been a huge earmarking whore.

9:19 PM – Ooooh, a feisty tussle over taxes.Â  Independents in the CNN focus group didn’t like it when Obama butted into McCain’s answer.

Did Obama just say as President that he would go “line-by-line” to eliminate earmarks.Â  Does the Constitutional Scholar not know that the US President does NOT have a line-item veto? Good heavens!

It is interesting that McCain seems to put Obama on the defense all the time.Â  Obama is quicker to get defensive than McCain has been so far.

McCain seems to be in control of the flow so far — especially now when he pointed out Obama’s record of supporting earmarks for oil companies in the energy legislation.

9:26 PM – Hey, Jim Lehrer — this was supposed to be a FOREIGN POLICY debate.Â  We are 30 minutes into it and I’m getting bored with the economic crap.Â  It is depressing and I’m on drugs that already depress me.

By the way, Barack is doing better so far than I thought he would.Â  I thought I should mention that.Â  Although he does have a penchant for holding up China as a good example to follow.Â Â  China is a communist nation, Senator, remember?

Best line of the night so far:Â  McCain – “Sen. Obama is the most liberal member of the Senate.Â  It is hard to find consensus in the middle when you are reaching so far over from the left.”Â Â  Good one, Mac.

9:31 PM – Really now, just answer Jim’s question about which priorities you will drop because of Barney Frank’s Financial Meltdown so we can get back to the FOREIGN POLICY DEBATE!

Good answer by McCain on proposing a Spending Freeze.Â  I’m all for that.

Obama says, end the war in Iraq to save some money.Â  McCain returns to the differences between he and Obama on energy policy; drilling and nuclear energy.Â  Good pivoting there, John.Â  Oh and he points out he and Senator Clinton agree on that.

Independents in the CNN focus group didn’t like McCain opposing a government-run healthcare system.Â  Interesting, scary.Â  They did like when McCain says Obama should plan to stop his $800 billion plan.

9:39 PM – FINALLY, a foreign policy question.Â  What are the lessons in Iraq?Â  McCain – when you have a strategy that is failing, change it.

He is smart to talk about the “consequences of defeat.”Â  Petraeus’ name lights up the Focus Group chart!

Obama:Â  this is where we differ a lot.Â  I opposed the war in Iraq six years ago, while BushMcCain supported it.

Now we are focused on the surge question and McCain points out Obama’s flip-flops on his positions on the topic.Â  Obama gets defensive again.Â  Now the anti-war Obama comes out guns blazing about McCain’s position on the original invasion.

McCain again puts Obama on the defense with the question of the surge.Â  “Sen. Obama doesn’t know the difference between a strategy and a tactic.”

9:49 PM – McCain points out that Petraeus and Osama bin Laden agree on one thing – the war on terror’s central front was in Iraq.Â  McCain is really cleaning Obama’s clock on Iraq.Â  Barack gets very flustered.Â  He should go on some of my drugs.Â  He wouldn’t care about anything.

Why does Obama pronounce Taliban as “Tal-ih-ban”??Â  It makes it sound like a Japanese restaurant.

Thanks Senator Obama!Â  I forgot about the poppy fields.Â  Maybe if my current pain meds fail, I can take a trip to Kabul.

9:54 PM – Nice connection McCain is doing:Â  Obama wants to employ a strategy in Afghanistan that he opposed in Iraq.

I’ll give these guys this much:Â  WIth this longer format, thank God this is not George W. Bush and John Kerry.Â  I’d need much more drugs than I have now.

Okay, Barry.Â  The “I have a bracelet, too” thing was pretty dumb.

10:03 PM – Question on the threat from Iran.Â  McCain says if Iran acquires nuclear weapons it is an existential threat to Israel and to the region.Â  He proposes a “League of Democracies” to impose severe sanctions on Iran.Â  Oh good, another world body.Â  Just what we need.

Barack says he believes Iran’s Republican Guard is a terrorist organization — but his Senate record is the opposite.Â  I see a GOP TV commercial here.

10:07 PM – Dan (GayPatriotWest) emails this:Â  “I’m thinking McCain is doing better than Obama, but isn’t doing great.Â  He missed a great comeback.Â  After Obama talked about four years of failiure in Iraq (you know, right after he said that the war didn’t begin in 2007).

McCain should have retorted, “And I tried to prevent those four years of failure.Â  I spoke out on numerous occasions telling President Bush he needed to change strategy.Â  I wish it hadn’t taken him so long to listen.Â  But at least he did.”

I also think McCain should have told The Constitutional Scholar that US President’s don’t have a line-item veto.

Ooooo.Â  Barry’s response on meeting with Ahmedinijad was weak.Â  He sounds like a lightweight.Â  By the way, spelling doesn’t count when I’m on vicodin.

Obama has said â€œJohn is rightâ€ five times in the debate so far. Fodder for the next McCain political ad perhaps?

Yeah, I noticed this too.

10:15 PM – Is the Kissinger comment by Obama a big deal?Â  I’m not sure.Â  I have never really been sure what Henry ever says.Â  He’s kind of like the political version of Bob Dylan.

Kissinger: “Well, I am in favor of negotiating with Iran. And one utility of negotiation is to put before Iran our vision of a Middle East, of a stable Middle East, and our notion on nuclear proliferation at a high enough level so that they have to study it. And, therefore, I actually have preferred doing it at the secretary of state level so that we — we know we’re dealing with authentic…” Sesno: “Put at a very high level right out of the box?” Kissinger: “Initially, yes. And I always believed that the best way to begin a negotiation is to tell the other side exactly what you have in mind and what you are — what the outcome is that you’re trying to achieve so that they have something that they can react to. Now, the permanent members of the Security Council, plus Japan and Germany, have all said nuclear weapons in Iran are unacceptable. They’ve never explained what they mean by this. So if we go into a negotiation, we ought to have a clear understanding of what is it we’re trying to prevent. What is it going to do if we can’t achieve what we’re talking about? But I do not believe that we can make conditions for the opening of negotiations. We ought, however, to be very clear about the content of negotiations and work it out with other countries and with our own government.” (CNN’s “Live Event,” 9/20/08)

Question about Russia.Â  Barack seems to be acting like he’s taking a foreign policy test.Â  It reminds me when George W. Bush struggled hard to drop names in his foreign policy debate with Al Gore.

Then again, did McCain REALLY have to pronounce the name of the Georgian President?

It would be great if one of them really flubbed and said something like “As soon as I heard about the invasion of Russia, I flew to Atlanta.”

10:22 PM – Wow, McCain really gets under Obama’s skin.Â  Obama can’t help himself in responding to every single point McCain makes against him.Â Â  Fascinating.Â Â  Very Clinton-esque.Â  He has to have everyone love him.

10:24 PM – Dan writes again:Â  “The more I watch this, the better McCain gets.Â  You’re right.Â  He’s been playing offense all night.Â  Obama defense.Â  So far that’s the big takeaway.Â  And I read it first in your live-blogging (though readers have since IMed reaching similar conclusions).

He was very good on Russia.Â  Very, very good.Â  And used a lot fewer “um”.

10:25 PM – McCain really seems in charge tonight.Â  If his goal was to put Obama on the defensive and to make him look like a lightweight — he won.

Nice one on McCain’s part — we’ve seen this kind of stubborness (Obama) before with this administration (Bush) in not realizing that they were wrong.

I’m losing interest and frankly, getting tired.Â  In closing, I think this debate was interesting — but it wasn’t a game changer.Â  It does seem like Obama tacked back to the left with his language, especially on Iraq.

It will be interesting to see what the flash polls say.Â  I’m going to bed.