A 20-year-old woman who was robbed at an ATM in Bloomfield was also maimed by her attacker, police said.

Pittsburgh police spokeswoman Diane Richard tells Channel 4 Action News that the victim was robbed at knifepoint on Wednesday night outside of a Citizens Bank near Liberty Avenue and Pearl Street just before 9 p.m.

Richard said the robber took $60 from the woman, then became angry when he saw a McCain bumper sticker on the victim’s car. The attacker then punched and kicked the victim, before using the knife to scratch the letter “B” into her face, Richard said.

Richard said the woman refused medical treatment after the assault, which happened outside the view of the bank’s surveillance cameras.

The robber is described as a dark-skinned black man, 6 feet 4 inches tall, 200 pounds with a medium build, short black hair and brown eyes. The man was wearing dark colored jeans, a black undershirt and black shoes.

So it begins.Â  I’m shocked that the mere stating of facts in this news report isn’t being branded as “racist”. 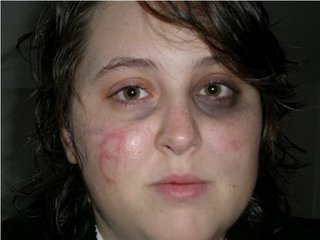 UP-UPDATE (from Dan): Because some readers have raised doubts about the story, I’m busy googling and checking the blogs to try and see if we can confirm this (or contradict it as the case may be).

UP-UP-UPDATE (from Dan): Michelle Malkin is skeptical. Phyllis Chesler is not. Me, well, let me just say, it doesn’t smell right that she refused medical attention.