I am shocked and saddened to hear of the sudden death of Philadelphia Phillies sportscaster and broadcast legend Harry Kalas.Â  It is fitting however that he died behind the sports microphone — doing what he loved.Â  What a great way to go. 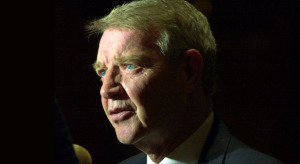 His voice is known by anyone who followed the Phillies or saw numerous shows produced by NFL Films.Â  He also did sportscasting work for CBS Radio and Westwood One network.

For me, this is like the passing of a family friend.Â  He was like your favorite uncle who you watched baseball games with on TV.Â  Kalas’ voice was distinct, legendary and memorable; and he was an American classic.

If God has a baseball game scheduled today in Heaven, he has the best sportscaster to call the game with him now.