Well, it was excessively windy when I arrived in Santa Monica so much so that they moved the protest from the Pier to the corner of Colorado and Ocean.

It was a most diverse crowd. One young man arrived on a skateboard while one old woman arrived, leaning on her walker. There were a lot of young people, maybe one-third of the crowd was under 30. And a good number of Ron Paul supporters, maybe one-fifth of the crowd.

It was haphazard. People were coming and going all day. And no one was sure who was in charge. While angry about federal spending, people were very, very friendly to one another. It almost seemed like a party at one point.

At the height of the rally, we estimate that there were about 400 people there, pretty good considering it was in the middle of the day in one of the most liberal jurisdictions in LA County.

I left this party to attend the evening rally in Van Nuys which drew a much larger crowd, maybe as many as 2,000. Fewer Ron Paul supporters there.

Here are a few of my Santa Monica pictures. In a later post, I’ll include those from Van Nuys.

Despite this woman’s loss of income, her spirits remained high. 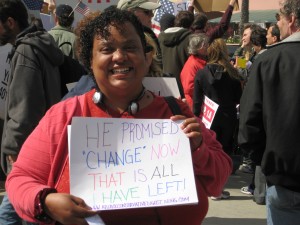 And here are two ladies agitating for liberty, one of them our loyal reader Leah: 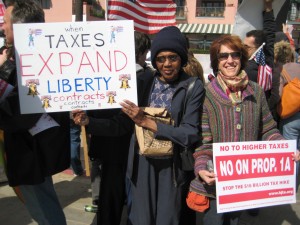 This was not just a Republican rally: 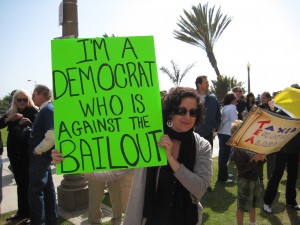 And here’s Leah laughing with a lesbian: 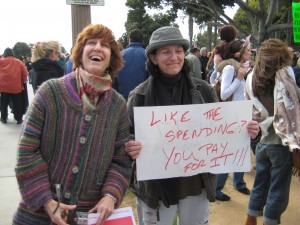 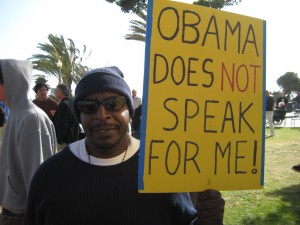 A real LA protestor, flashing his sign while chatting on his cell phone:

This patriot was not the only one hoisting a sign comparing the current government policy to piracy. 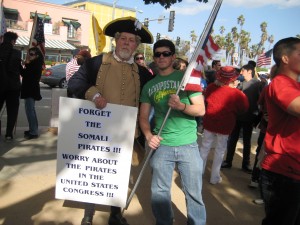 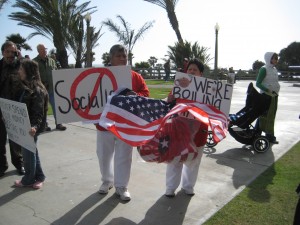 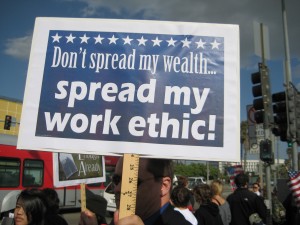 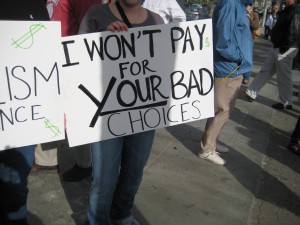