Buried in heavy wet snow at HQ this evening (and almost trapped at SOUTHCOM today), I took some time and caught up with our Dear Leader and his backpacking trips throughout the world as of late.

Fresh off his stop south of the border where he blamed the drug mafia’s overrunning of a clearly impotent and/or corrupt Mexican government inexplicably on US gun laws, he followed on to the Carribian to attend the Summit of the Americas. 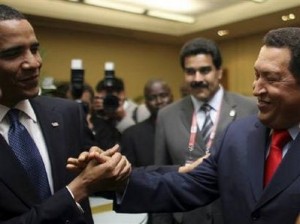 And let’s not forget the words of Chavez from less than two years ago:

The United States empire is on its way down and it will be finished in the near future, inshallah.

No doubt we’ll hear the president soon saying that “these words do not reflect the Hugo Chavez I know.”

Reading Obama’s words in Mexico, I got to thinking: Those who spend time on social networking sites are familiar with the “Countries I’ve Visited”-type applications that allow jet-setters (and humble military deployers) to show off all the fantastic places they’ve been. I decided to start one for the Big O. Below is a map of the world showing all the places President Obama has visited and trashed the United States. While he didn’t explicitly trash the USA in Saudi Arabia, the way he, as the leader of our Nation, subjugated himself in public to the throne of that kingdom, I’m going to count it. I’ll be back tomorrow if I need to add Trinidad and Tobago (which, unfortunately desipte its name only counts as one). Please feel free to correct me if I’ve missed any.

UPDATE!
A very helpful commenter reminds me of The One’s trip in February to Canada where he indeed did badmouth us. I’ve also had a couple requests to improve the quality of the map. Given that the Dear Leader is currently in Trinidad and Tobago, I know I’ll have to update it pretty soon anyway, so I’ll hold off for now on those improvements and just post a brand new one once he insults us all at the Summit. As for the concern about Germany, I don’t think I’ll count that as he was merely a Senator (do you remember when he was just a Senator?). It would be impossible to include his trips before being inagurated president since his destinations and words weren’t always in the public record back then.
Fear not, though. I’m sure he’ll be back to visit our friends in Europe soon enough. And when he does, he’ll be packing his disdain for us with him.