I just returned from an afternoon at a place that many readers of the site, including (and especially?) its two principle bloggers consider practically sacred.  With Dr. Nigel Ashford, the distinguished British political scientist honored by Dame Margaret Thatcher, I had a tour of the Reagan Ranch.

Kudos to the folks of the Young America’s Foundation for taking such good care of this site and for treating us well on the tour.

While the ranch sits on a large and beautiful piece of land, the house itself is quite small, only 1,800 square feet.  The Gipper himself was notÂ extravagant.  He built the fences around the property and even built the front porch.  He cleared brush and took care of the horses.  In short, when he was out there, he liked to work with his hands.

The house had a Western/Southwestern theme, with paintings of Western landscape and American memorabilia.  I particularly enjoyed a chair whose cushions were covered in a needlepoint image of a Minuteman with the year 1776.

Of the many stories our tour guide shared with us, this one best (in my mind at least) described Ronald Reagan the man.  Before going riding with his beloved Nancy, he always insisted on tacking her horse. He would never let the staff do it. When her horse was ready, he rang the bell below to signal that it was time for her to join him. 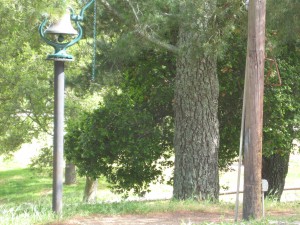 Even as president, he insisted on performing this task himself.  As valuable as then was his time, he had to go out of his way for Nancy. No wonder he was such a great leader. He knew how to appreciate the things that really matter, knew how lucky he was to have found a woman who loved him the way she did.

UPDATE: As per Sonicfrog’s comment, I provide a picture of the Suburu Brat below the jump. 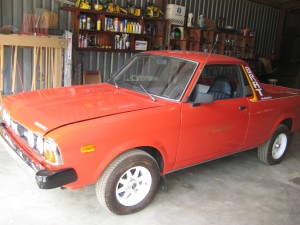