It it with great sorrow that I read the news this evening of the passing of former Congressman, Cabinet Secretary and VP Candidate Jack Kemp.Â  He was one of the good guys in politics. 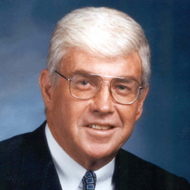 Rest In Peace.Â  I’m sure there is a touch football game in Heaven tonight.

UPDATE: Kemp’s last syndicated column was in honor of his great hero, Abraham Lincoln.Â  Here’s a key passage which sums up Kemp’s philosophy as well:

For Abraham Lincoln, true welfare meant not dependency, but well-being; not equality of reward, but equality of opportunity; not reliance on the state, but reliance on oneself and one’s family. He wrote, prophetically, “The progress by which the poor, honest, industrious and resolute man raises himself, that he may work on this own account and hire somebody else … is the great principle for which this government was really formed.”

Nick (ColoradoPatriot) is right.Â  America has lost a great defender of liberty in Jack Kemp.