Commenting to the first post on my visit to the Reagan Ranch, Mark Noonan recalled his own visit to that beautiful but simple place:

When I visited a couple years back I was impressed by the ordinariness of the place. Clearly just where Ron and Nancy Reagan liked to go and be themselves. The tool bench in the garage could belong to any middle class American do-it-yourselfer…

It struck me as well.   Our tour guide told us that one of the Gipper’s favorite gifts was a chainsaw, something he used to clear brush, particularly for riding trails.   (Apparently, his son Michael, now a talk radio host, used to give his Dad one every year on his birthday.)

To know that he worked with his hands on his down time suggests a man connected to the real world and not lost in a haze of ideas and abstractions.  It truly humanizes him.  Apparently, W, as well, when he was at Crawford, worked on his ranch.

So, let share with you a few pictures from the Gipper’s garage, images similar to those seen in the Walter Kowalski’s (Clint Eastwood) garage in Gran Torino or in the work sheds or garages of countless men across this great nation — and even abroad: 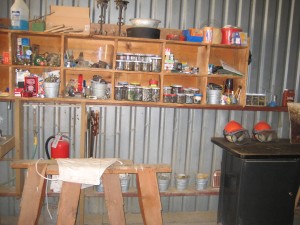