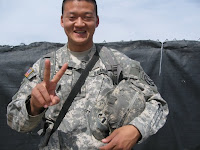 In three parts over at Ramble Redhead. Very interesting with Choi telling of his growing up, life at West Point, his service in the US Army over in Iraq, and of course coming out. Well worth listening to and I hope that the good Louie will join the fight against the unjust DADT law with a worthy group of gay vets like Servicemembers United. His voice is certainly a powerful one in this debate and his work with Knights Out should go a long way to helping bring DADT to the demise it so richly deserves.

Spoiler: Choi’s first-generation Korean parents were oblivious to his being gay, so much so that when they suspected their older son of being gay they sought his advice on how to “change” him. Ironically the son they thought was gay is actually straight while the “straight” son they sought advice from is gay. Priceless.