In my post yesterday on the California Supreme Court upholding Proposition 8, I wrote that the reaction of the activists to the ruling could well determine if voters overturn the ban when a initiative to do so is placed on the Golden State ballot.

To see just how some were reacting, I decided to trek down to the Decision Day Rally in central West Hollywood last night.  I was actually impressed with the gathering.  There was a large crowd.  It seemed to be about the size of the Van Nuys Tea Party when I arrived (about 3,000), then grew, maybe to twice that, perhaps even more.  I was in the middle of it so couldn’t really tell.

And while there were a few angry T-shirts and a number of nasty signs, I didn’t get the same vibe as I did last November when I witnessed a march protesting the passage of Prop. 8.  It seemed there was more anger on the podium than there was in the crowd.

Like the Santa Monica Tea Party, it had more of a festive than protest atmosphere.  This is not to say there wasn’t any anger there, but that people by and large kept it under control, save for a few of the speakers, two in particular. 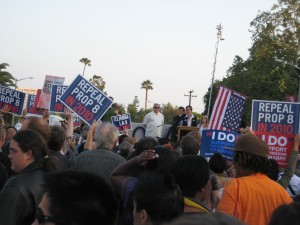 I took some pictures of the crazy signs, but am hesitant to publish them because they were not the defining feature of this rally (so I may just post them later, then bump this post so it leads the blog).

Running into my friend Kerry, the aforementioned lesbian for liberty (I wonder if we were the only people here who had also attended a Tea Party) I ended up joining the march, something I had not anticipated doing.  As she and I talked, my observations coalesced into a kind of conclusion which found expression in this maxim,”First, do no harm.”

I don’t think the rally today will do anything to harm the movement to change minds and overturn Proposition 8.  There was, to be sure, some overheated rhetoric (more on that in a subsequent post, which may end up as a “previous” post if I bump this one).  While the rally will not do any harm, I’m not sure it will do any good either.

Only one speaker really made a strong case on why gay marriage is a good thing (and then only briefly).  The others dwelled on rights and some on accusations.

On the whole, I have to give credit to the organizers.  Despite some problems with the sound system, the event was very smoothly run.  It allowed people to vent in a manner that was at least, not counterproductive.  And they had the good sense to have the marchers turn east on Santa Monica Boulevard–away from the Mormon Temple.

This rally wouldn’t be about demonizing Mormons, but instead expressing their upset about the court decision.  And that seemed a better –and more productive–way to address and express their frustration at today’s decision.

One guy did have a sign taking a swipe at Mormons, but I thought it was kind of clever.  I mean, when one speaker was insisting we had the “right” to get married, I was saying, well that means I have the right to find a husband, so where is he.  This sign kind of echoed that sentiment: 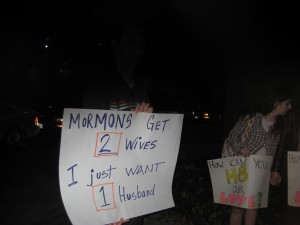 I kept trying to get his face in the shot (because it was a nice one), but it was night and I was not adept enough with the flash to get both the face and the sign.