When I headed to the rally, I expected to encounter a vicious crowd, similar to those I witnessed in the wake of the passage of Proposition 8 last fall.  To that end, I was on the lookout for some of the more extreme signs.  I did get a few of pictures of such placards.

But, let me caution those of you who might want to smear the entire rally by a few of its most extreme participants.  Such extreme banners may have constituted a majority of hand-made signs, but they represented only a fraction of the signs being waved, most of the people holding signs waved ones like these: 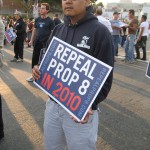 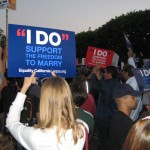 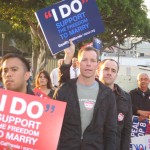 I ran into my friend Kerry with whom I had rallied at the Santa Monica Tea Party.  Like those rallies, this one (and this was one of many across the nation), was a genuine grassroots gathering. But, I dare say the pro-gay marriage rallies will get better coverage in the MSM than did the anti-tax and spend rallies last month.

As Kerry and I walked together down Santa Monica Boulevard, she offered an interesting thought, “What’s the next generation going to do when there’s nothing to get into the streets about?”  It does seem that some of the participants wanted to create a new generation of protest. 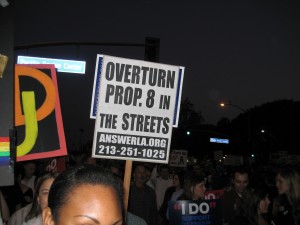 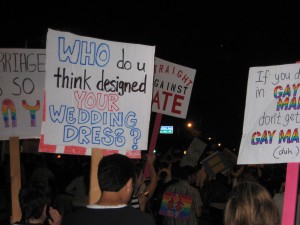 What would a gay rally be without socialists? 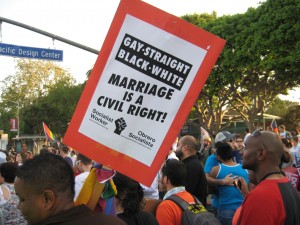 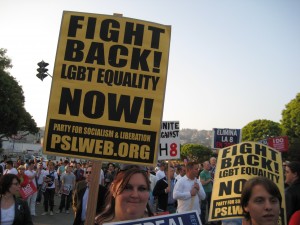 And of course, there were those smearing the Court, proponents of traditional marriage or anyone who just plain disagrees with them as haters: 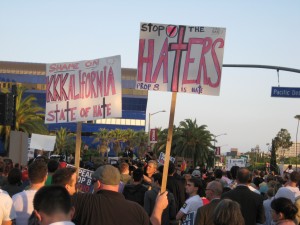 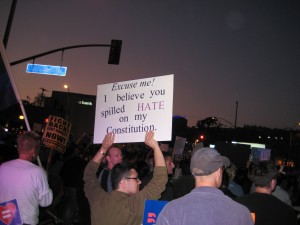