Perhaps it’s his non-takeover of two of the Big Three auto manufacturers. Maybe it’s his consistent belittling of his own country while representing it overseas.

Whatever it is, it has taken Barack Hussein Obama 136 days in office to reach parity on Rasmussen’s Daily Presidential Tracking Poll. 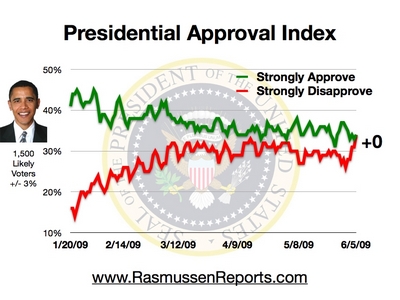 Rasmussen takes a daily approval poll for the president and then subtracts the percentage of those who “Strongly Approve” of his performance from those who “Strongly Disapprove” to come up with what they call the Presidential Approval Index, which today for the first time stands at 0. As Rasmussen puts it, “That’s the highest level of strong disapproval and the lowest overall rating yet recorded.”

One would hope, as was screamed at Bush for eight years, that Obama might take this to heart and attempt to better represent his constituency which is growing ever more tired of his far-Left extreme policies. One mustn’t hold his breath, though.

UPDATE (from Dan): Interesting to note the steady, gradual decline of his strong approval and the quick uptick in his strong disapproval. May have more to say about this later.