Reading yesterday that some prominent gay donors to the Democrats were pulling out of a party fundraising dinner later this month because the President has been backtracking on promises he made to the gay community helps illuminate San Francisco Mayor Gavin Newsom’s political strategy.  It becomes increasingly clear that his decision to direct city authorities to issue marriage licenses to gay couples in 2004 was a ploy to curry favor with the gay community in anticipation of a future gubernatorial bid.

And now with his rainbow “Newsom 2010,” signs, we see how it’s tapping into our community’s enthusiasm for his actions as he begins that campaign.

With these prominent gay figures pulling out of the national Democratic fundraiser, we are reminded just how generous gay people have been to the Democratic Party and Democratic candidates.  While we may not be as demographically strong as some activists might claim, we are a relatively affluent community, thus a ready source of campaign cash for political candidates.

So, Newsom sought to become a folk hero among gays in order to raise money from affluent homosexuals and to seek volunteers among impassioned activists for his 2010 campaign.  And Newsom supporters were out in force at the Gay Pride festival this past weekend in Los Angeles.  His rainbow signs and stickers were ubiquitous.  Those very signs indicated his recognition of the role gay people play in California Democratic politics.

He marched with his supporters in Sunday’s parade: 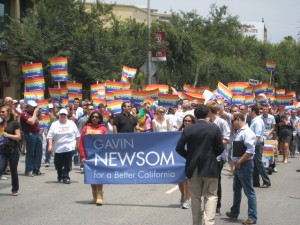 Newsom’s pandering to the gay community is a smart political strategy.  It could put him in a good position to win a potentially crowded Democratic primary.  Enthusiastic gay people are more likely to vote than other groups.

It’s not clear, however, how much this will help him in the general election.Indeed, should a proposition appear on the fall 2010 ballot to repeal Prop 8, they would energize evangelical voters–and Republicans would already be energized to vote against big-spending Democrats.  That could diminish Newsom’s chances.

Right now, the San Francisco Mayor is focused on winning his party’s gubernatorial nomination.  And he seems to be doing all the right things to tap into the financial resources of an affluent community and the energy of that community’s overly politicized activists.