For the fourth time since I moved to LA, I trekked up to Hollywood Boulevard to honor a legend who had recently passed by laying flowers on his star on the Walk of Fame.  The large wreath is something the Hollywood Chamber of Commerce places over the star of each individual when he dies.  Mine is the smallest bouquet. 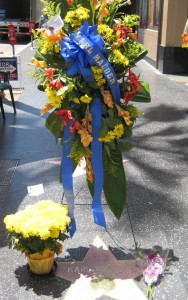 On my way to Malden’s star, just east of Hollywood & Vine, I passed Michael Jackson’s star just in front of Grauman’s Chinese Theater. The sound trucks that had been there the last time I drove through the heart of Hollywood were gone, but the barricades — and the crowds–remained, with posters expressing people’s affection for the King of Pop and sadness at his passing. There were also balloons and flowers, a marked contrast to Malden’s star–near an empty Hollywood cafe.