There she goes again. It seems all Ma’am Boxer need do to make a fool of herself is open her mouth. No wonder she’s not planning on holding any meetings with the people she was elected to represent in the United States Senate.

Just watch the clip that Nick linked and let me know if you believe Ma’am’s claim about silencing Republican protesters by reminding them that Ronald Reagan came from California. That one just doesn’t pass the smell test. If you have evidence proving me wrong (and Ma’am right), please provide it.

So, if she’s going to denounce protesters today whose goal (as she puts it) is “to hurt our President and to change the Congress,” I’m sure we’ll find ample video footage of her denouncing those protesting George W. Bush and his policies during the first eight years of the current decade.  And taking issue with efforts of her own party to “change Congress” in 2006 and 2008.  I mean, weren’t some of her allies then trying to “hurt our president” and change Congress?

Now,  if Ma’am claims the protesters are too well-dressed to be sincere, let me show her a few pictures from protests in her own jurisdiction, i.e., California (taking at the April 15 Tea Parties in Santa Monica and Van Nuys).   Since they’re not wearing suits and ties, will she now take these protesters seriously? 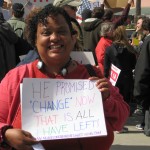 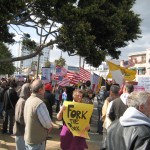 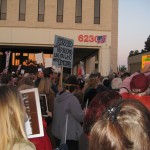 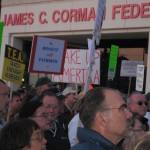 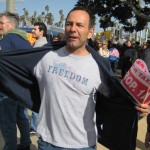 (If Ma’am is interested, I could send her more pictures of her constituents protesting in T-shirts and jeans — or similar attire.   And if my California readers have pictures of Golden State protests where people are dressed in similar attire, send them here, maybe we’ll make a collage and take it to Ma’am’s office so she can learn a little about the folks she’s supposed to be representing.)

(H/t–my blogging nephew and not the one who has to wait a few years before he’s reading for Disneyland.  Mitchell e-mailed me a link to Ed Morrissey’s post and I had read his missive before seeing Nick’s post.)