Two of our readers, Leah and JuJu, attended the townhall Congressman Adam Schiff (D-California) held last night in Alhambra on health care.  Each had a different take on the turnout with Leah saying it was 3-4,000, but JuJu counting about half that.

Leah thought that roughly 60% of those there supported the President’s plan, yet notes “Looked like unions brought people in for the pro side. They had printed signs, our side was all handmade.”*  Seems to be a common theme of the sign.  Even the pro-ObamaCare signs saying “mean things” were pre-printed.  Hmmm. . . . and which one counts as Astroturf?

Congressman Schiff had assembled a panel of six to discuss health care reform.  All six, as Leah put it, extolled “the virtues of the plan; no one had anything negative to say about the plan. It was simply propaganda for the obamacare plan.”  Interesting that this Democrat didn’t include any critics.  Wonder if he’s even aware of what the serious critics have to say.

All the questions were filtered through a mediator, with some read from what people had written in.

Here are some of Leah’s pictures.  Interesting to note how many of these folks wore T-shirts and tank tops.  None seemed clad in Brooks Brothers attire.  Wonder if Ma’am Boxer will now consider her constituents’ concerns legitimate.  I mean, if they were well-dressed, they couldn’t have been sincere. 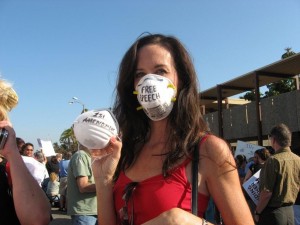 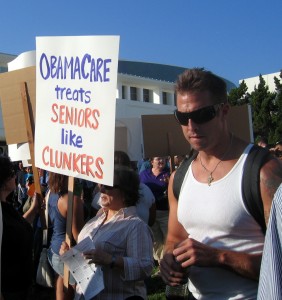 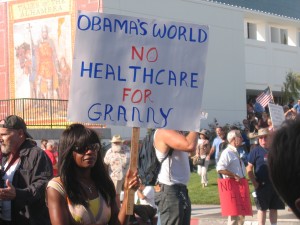 So this is a “town hall” in Susan Davis’ idea of democracy.

Her “town hall,” which was kept secret from her constituents and the public until this morning (and even then advertised only to sympathetic groups), somehow managed to attract hundreds of Obama supporters with oddly identical pre-printed sign.

Glenn, who linked the above, offers, “I can see the appeal of a friendly crowd, but what does this really accomplish? Maybe a bit of positive local media, but just as likely some negative stuff as people complain. Is it just about protecting politicians’ fragile egos?”