I’m in awe watching over 2 million people gather on the National Mall in Washington, DC.  It is too bad that the mainstream media isn’t treating this protest as they did the lesser-attended Anti-Bush Iraq War Protests or even the “Million Man March” (which didn’t reach 1 million).

UPDATE: VodkaPundit is live-blogging from DC. 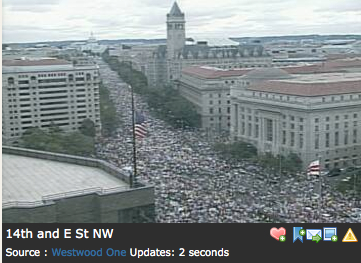 There are also hundreds of thousands of folks in other cities all around the USA in similar Tea Parties today.

This is a very inspiring day.  We need to join together and make our politicians in Washington more afraid of We, The People than they are of entrenched special interests.

Since most of the mainstream news media is ignoring Two Million Americans today, follow the developments all day long at www.twitter.com at #912 or #912DC.

I’m proud to be a Constitutional American today.