With the Dow reaching–and remaining above–the 10,000 benchmark, there are signs of a “fledgling economic recovery.”  Inflation remains low meaning consumption to tick up.  Not just that, new “jobless claims [have] dropped to the lowest level since January.”  Still, “the drop isn’t yet steep enough to signal new hiring”.

Now, I’m sure the Administration is spinning this news as success for its “so-called stimulus.”  Even an AP reporter covering the economy echoes its talking points:  “businesses that received federal contracts under the administration’s $787 billion economic stimulus are reporting more than 30,000 jobs saved or created in the first months of the program.”  Emphasis added.  It’s the Obema team who came up with that impossible-to-prove assertion about jobs created or saved.

Perhaps, had the Administration not fallen for a Miss R. Scenario, they might have more credibility today.  Recall, the promises they made about what would happen if the “stimulus” were defeated.  We’d see unemployment rise to the level of the lighter blue line.

Well, the “stimulus” passed.  And unemployment has exceeded even that level. 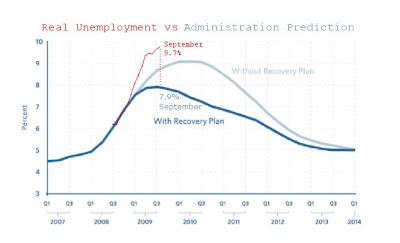 Had the Preident lowered its expectations, not promising a quick reduction in unemployment and counseled patience, he might have more credibility  today on the economy.   There are, to be sure, clear sings of recovery.  But, even a news report, giving the Administration’s policies a favorable spin can’t find any real evidence of new jobs being created.

And with its assurances that unemployment would start declining this fall, that’s just what President promised.