Folks, this is the original “hockey stick” graph that was so compelling in Al Gore’s movie “Inconvenient Truth.”  This graph, and much of the other data Gore hawks, came directly from the computer models from the Climatic Research Unit of the University of East Anglia in eastern England.

This graph has now been proven to be a complete lie and utter fiction. 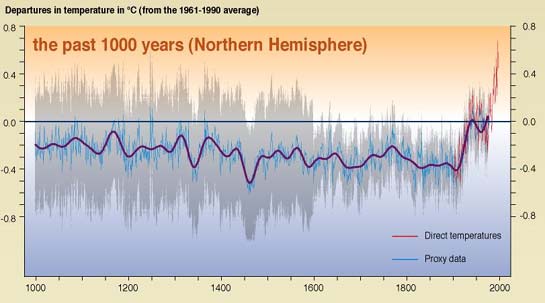 Bearing this in mind, I think most people–including me–missed the biggest part of the climate emails story.  Sexing up a graph is at best a misdemeanor.  But a Declan McCullough story suggests a more disturbing possibility:  the CRU’s main computer model may be, to put it bluntly, complete rubbish.

The emails seem to describe a model which frequently breaks, and being constantly “tweaked” with manual interventions of dubious quality in order to make them fit the historical data.  These stories suggest that the model, and the past manual interventions, are so poorly documented that CRU cannot now replicate its own past findings.

You see, folks.  According to the emails from the CRU scientists themselves, the post-1960 data (the beginning of the “hockey stick”) was constantly “fiddled with” to the point that the entire model is a complete lie.  They were tampering with science from the start.  THAT is the story of the “Climategate” emails.  The CRU scientists were, in effect, ruining the modeling from the beginning and at many points along the way.

Those who deny the science behind the manipulation of the computer models are, in fact, denying the truth from the words of the CRU scientists themselves.

RELATED: There Was Proof Of Fraud All Along – Vincent Gray, IPCC expert