I have an exclusive story here folks!  My sources within the government have informed me that thanks to the intrepid hard work and intelligence gathered earlier this week in Costa Rica, a deadly and widespread terror sleeper cell has been disrupted. 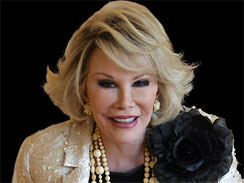 It appears that a band of Joan Rivers impersonators had been deployed to conduct a campaign of terror by disrupting sleep patterns throughout the United States.  The Joan Rivers look-alikes talk with voices that interfere with the normal wavelengths of human perception.  The cackling and screeching being uttered across the nation would have resulted in mass insomnia from coast to coast.

Thank God our CIA, TSA and worldwide intelligence officials were on the look out for these dangerous suspects and picked up their leader before she had a chance to deploy this evil plot.  White House Spokesperson Robert Gibbs was quick to point out today that the Joan Rivers Sleeper Cell was a direct result of GITMO being used as a recruiting tool with drag queens.