Marco is coming on in a few minutes and is now being introduced by the esteemed conservative US Senator Jim DeMint from South Carolina (also known as PatriotMom’s Senator). 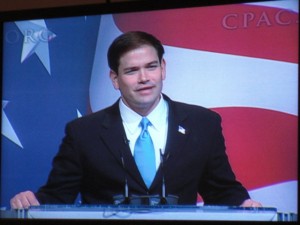 Rubio: “The blizzard may be the best thing to happen to the American economy in 12 months!”

Rubio is now articulating the fundamentals of America — First Principles.  “The only country where it doesn’t matter who your parents were.  Which country would you trade places with?”

“Those with a worldview that were elected in 2008 are now using the economic downturn, not to fix America, but to change America.  This growth in our government is being funded by foreign money.”

“The good news is that it didn’t take Americans a long time to figure this out.  Leaders at the highest levels are trying to redefine the American government and economic system.  But Americans have figured it out.”

“This is the single greatest political pushback in American history.  2010 is a referendum on the very identity of our nation.”

AWESOME: “The US Senate already has one Arlen Specter in it.”  [referring to Charlie Crist]

Rubio is now articulating coherent pro-growth, pro-free enterprise policies that most Americans would believe in.

Rubio: “These [Islamic] terrorists aren’t trying to kill us because we offended them.  They are trying to impose their view of the world on us and America is standing in the way.”

Rubio: “What makes America great is that there are dreams that are impossible everywhere else, but are possible here.  Why is that?  Most other countries chose government to run their lives.  The problem is that when govt controls the economy, those who can influence the govt always win — and everyone else stays the same.  In other nations, the employee can never become the employer.”

“Everything I’ve accomplished, I owe to my parents, my God and to the United States of America.”  Marcoooooo!

“Let us ensure that history’s record of this time is clear.  Like those Americans who came before us, we rose to face the challenges of our time.  Let us make the right choices so that the American miracle can live on.”