Good morning America… from your Nation’s capital.  The CPAC10 Conference is already underway and I’ll do my best to hit the highlights. 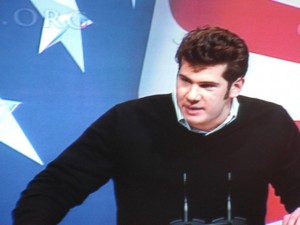 PJTV rockstar and comedian Steven Crowder got the crowd going already with a quick set of barbs against the Powers That Be, and Olbermann.

UPDATE: Looks like we have some work to do with Rick Santorum on the issue of Don’t Ask, Don’t Tell.  However, I know Santorum personally and have worked with him for many years (in my other job) and I know he is a good man.  He is not homophobic but he does have concerns about using the military being used for social experiments and subject to political correctness.  I think he’s wrong.  But that DOES NOT make him homophobic.

But Santorum did just say that the idea of an IRS audit each year for every member of Congress was a good idea.  You have to balance the good with the bad!  🙂

NOTE: I would like to mention that the applause on Santorum’s DADT response was tepid at best.  Honestly.  DADT splits free-thinking people on the left and the right and in the military.  There will be a blogger meet & greet with Santorum in about an hour.  I’m hoping to talk with him personally.

9:44AM: Okay, I’m back. You really all should follow me on Twitter, you know!  One of my conservative heroes — Jonah Goldberg — is now on the mainstage.  I once interviewed Jonah on the barely-used GayPatriot BlogTalkRadio program.  He’s discussing how fascism was born on the left political spectrum and how totalitarianism is still admired by American liberals.  Hey, someone should write a book about this!