Your Senate Majority Leader has wisdom beyond words that has no bounds.

Reid, speaking in the midst of a Senate debate over whether to pass a $15 billion package meant to spur job creation, appeared to argue that joblessness would lead to more domestic violence.

“I met with some people while I was home dealing with domestic abuse. It has gotten out of hand,” Reid said on the Senate floor. “Why? Men don’t have jobs.”

Reid said that the effects of joblessness on domestic violence were especially pronounced among men, because, Reid said, women tend to be less abusive.

“Women don’t have jobs either, but women aren’t abusive, most of the time,” he said. 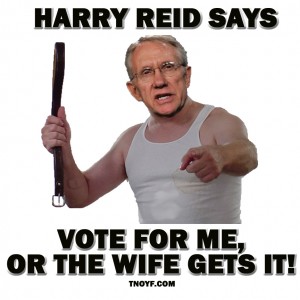