Since I had only driven by the banners on West Hollywood lamp posts two times (once in each direction) yesterday before posting on how my city is honoring Left-Wing Women’s Activist History Month, I decided to take a break from reading about the Iliad to do a very un-LA thing and take a leisurely stroll down Santa Monica Boulevard to review the various banners.

They had Zelda Gilroy, a former California state Senator, but not Dianne Feinstein, California’s senior United States Senator and a woman of some accomplishment, having held her city together when its Mayor and a City Supervisor were shot down in 1978.  The Women’s Advisory Board to the City of West Hollywood couldn’t find anyone who had achieved anything before the late Nineteenth Century.  No Abigail Adams, no Dolley Madison.  No George Eliot or Jane Austen.

Most of them featured on the banners were activists and none of them activists for liberty, most activists for “rights.”  Let’s take a gander at some of the women honored. 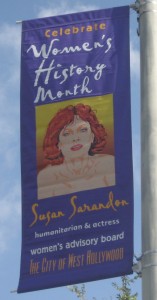 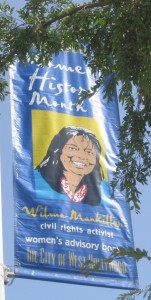 Basically, the City of West Hollywood has used our tax dollars to promote the political agenda of the far left.  This would be a fine exercise of freedom if the City were not a public entity.

This does provide a window into the mindset.  To the folks our City Council has tapped for its Women’s Advisory Group, the women who make history are not so much those who have accomplished great deeds, but have militated for “rights”.

This is not to belittle some of these ladies’ accomplishments for some were indeed pioneers worthy of recognition.  This is merely to point out a skewed view of the world.  Some may have quibbled about my inclusion of Phyllis Schlafly in my prior post, but the point is that she has actually accomplished something in much of the same manner as the women this city honors.

And we learn that they’re not honoring these activists’ gender as much as their ideology, appropriate perhaps for a union hall or party headquarters, but not on a public street where if they honor women of accomplishment from one side of the political aisle, they need also consider the other.