Despite all the hulabaloo in the media about the racist and anti-gay epithets Tea Party protesters allegedly hurled at African-American Congressmen and the unhappy Barney Frank, we could find only one corroborated report of such slurs; a POLITICO reporter overheard someone in the crowd yelled “faggot” at Frank.

And yet some in the MSM continue to peddle this nonsense about the movement being racist and anti-gay.

Yes, we do have that one example of a random person in the crowd, yelling a hateful slur.  But, when a Congressman uses a sexual slur her fellow partisans (in the Democratic Party and in the MSM) regularly use to describe these protesters, the same people who can’t contain their outrage at alleged racist epithets remain silent.

Note the contrast?  A citizen yells a hateful slur and the media get their panties all in a bundle.  An elected Democratic Congressman uses a sexual slur to deride citizens protesting big government and they yawn.  If it’s bad enough (and it is bad) when one citizen uses hateful rhetoric, wouldn’t it then be worse that it’s become commonplace for Democratic officials and their allies in the MSM and blogosphere to use a deliberately derogatory term to describe the most important and energetic political movement to emerge in the Obama era?

Routinely, I read comments either caught in our spam filter or which appear with our posts where readers describe the Tea Party movement a racist and/or anti-gay.  Yet, I wonder how many of those folks have ever actually been to a Tea Party.   These critics are not describing the Tea Parties that are, but conservatives as they see them.  They’re describing an image in their own mind, not the protests taking place in town squares and public plazas across our country–and certain to increase in the coming days, weeks and months.

No matter what we say or do, it’s unlikely to change the narrow views of these prejudiced critics of our movement.  The reality of the situation won’t change the perception conjured up by their imagination.  They want Tea Parties to be racist and anti-gay, so racist and anti-gay they shall be.

Perhaps, to prove them wrong, we should bear signs proclaiming that we’re “Lesbians for Liberty” or “Homos for Freedom” the next time we attend Tea Parties to see how our fellow protesters react.  Wait, our readers did just that: 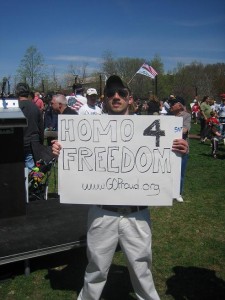 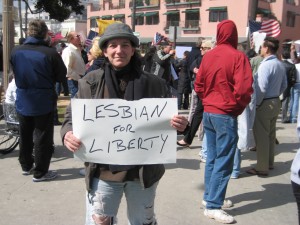 And they weren’t taunted or asked to leave, indeed, they were made welcome, quite welcome.  Their experience kind of defeats the narrative.

ADDENDUM:  Glenn Reynolds has a great roundup on the determination of Democrats to brand the Tea Parties as racist–despite a paucity of evidence.