The last time I saw Bruce was in November 2004 at the sacred shrine to freedom in Southern California Reagan Library.  So, it is entirely fitting that when we got together again, it was in that very place, this time, right under the fuselage of Air Force One (where we dined before Karl Rove’s talk).

Most people think that since we blog on the same site, we travel in the same circles, but we hadn’t even met when he asked me to join this blog.  And don’t see each other on a regular basis, communicating only via e-mail (and sometimes text).  After all, we live on opposite ends of this great nation.

It was great to see him — and our reader Leah — for a pleasant dinner before walking over to the lecture hall to hear Rove speak.  As Bruce reported, he gave a humdinger of  a speech.

I took notes the old-fashioned way, even used a fountain pen.  Meanwhile, I caught Bruce blogging away on his iPhone:

And then of course, Bruce got to pose beside a picture of the greatest domestic policy president of the last century. 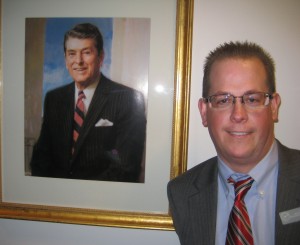 When we got our books signed, I introduced myself to Mr. Rove, identifying this blog, making clear that it was a “gay conservative” site.  He rose to shake my hand and was most cordial and that of Bruce.  Guess he isn’t bothered by gay conservatives.

Barney Frank’s fantasies notwithstanding, we weren’t escorted off the premises while the staff yelled hateful slurs.