As our readers note, Tammy Bruce is a gun-toting, abortion-rights’ supporting lesbian feminist who once served as president of the LA chapter of the National Organization for Women, breaking with them after her harsh criticism of O.J. Simpson and his defenders during his murder trial.  In 1992, she enthusiastically backed Barbara Boxer in her first bid for the United States Senate.

On Saturday night, she was Bruce and my guest at the Claremont dinner, honoring former Vice President Cheney.  And not only was it a treat to hear the Vice President speak and to meet that great and good man, but I was particularly honored to sit next to Tammy at dinner.  She is a great conversationalist who does not mince words. 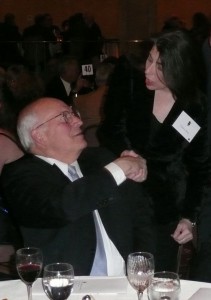 And during dinner, we were constantly being interrupted as numerous guests at this fundraiser for a conservative think tank came up to tell this pro-choice lesbian how much they loved her and appreciated her work.  She was even approached as we retreated to the bar after the dinner.

So, here we have an openly lesbian, openly pro-choice, openly feminist woman with an enthusiastic fan base among Angeleno conservatives.  Guess being a lesbian is not a hindrance to earning accolades on the right.  Kind of defeats the narrative of a narrow-minded, gay-hating right.