Ah, so what if he once lived in freedom and was stripped away from his American family by President Clinton and shipped to the heart of a Communist dicatorship.  At least Elian and I will soon have the  same socialist-inspired healthcare that Michael Moore so loves.  Meet Comrade Gonzalez.  I’m betting President Obama would love to add him as an advisor some day.   After all, there are enough Marxists in the West Wing now to fill Castro’s palace in Havana.

For those of you who have forgotten (or never knew) how thuggish Bill Clinton’s Justice Department was…. 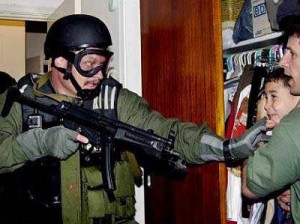 … that’s Elian as a boy on the receiving end of an American gun in Miami.  Pleasant, eh?

In the late ’90s, a 5-year-old boy named Elian Gonzalez found himself at the center of an international tug-of-war. On Thanksgiving Day in 1999, Elian was found floating off the coast of Florida after the boat that was taking him from Cuba to the United States sank. His mother and 10 others drowned.

Relatives in Miami opened their arms to Elian. Marisleysis Gonzalez, his 21-year-old cousin, became Elian’s primary caregiver. “I guess he saw that mother figure in me,” she says. “He was always attached to me.”

For five months, Elian lived in Florida. Then, one day, his father came to claim him.

With the U.S. government’s help, Marisleysis says she and her family arranged for a psychologist to help determine where Elian should live…but that meeting never happened. One day, Marisleysis says federal agents stormed her house with their guns drawn and took Elian away. “It was terrifying. It was something I never expected,” she says. “[Elian] was begging for nobody to take him.”

Those pesky liberals.  Always speaking of freedom in the Third Person.
-Bruce (GayPatriot)