Although I haven’t read it yet, I have met the author and we have become fast blog-buddies.  Andrew Ian Dodge and I were on a panel together at CPAC.  He’s a great and interesting guy and a mover and shaker in the Tea Party Movement.

And his book, “And Glory” does sound like a good one! 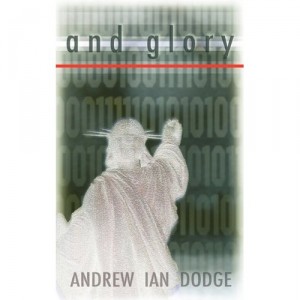 The year is 2034. Power lies in Europe with the bureaucrats in Brussels and London is the centre for the Western Provinces.

The Supremo Manipulator of this conglomerate of nations is Pius. With no religious connections and a diminishing hold on power the Union is sustained by nepotism, violence and musical chairs of political appointees. The disintegration of the Union is imminent.

Rob, an English tech nerd together with his accomplice David, have to use their cyborg intelligence to survive in this oppressive Euro society in the Western Provinces. The assassination of Teresa, Rob’s girlfriend, and a busload of tourists along with the murder of a Czech student at Hull European University, provide the catalyst for Rob and David’s dangerous involvement. Together with their minders, Michaela and Kiara, they head full speed into their deadly adventure. Death is catching.

With a touch of humor, a satirical political edge, characters that you come to know well and a flowing writing style take the reader through a techno-thriller deep into the 21st century. We see the ambivalence of the revolutionaries, who never intended serious action, faced with orders to destroy and kill. Europe will never be the same again …

This kind of story is right up my alley.  Time to go download it for my Kindle!