So, we’ve all seen this picture by now: 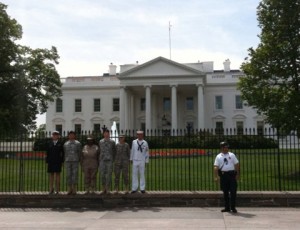 It’s of the six servicemembers who were protesting Don’t Ask Don’t Tell the other day in front of the White House.

This isn’t a post about Don’t Ask, Don’t Tell. It’s not even (really) a post about politics. I have a question, though: What’s the deal with protesters handcuffing themselves to stuff? Call me an old fuddy-duddy*, but usually these civil-disobedience stunts make no sense to me.

Reminds me of the Seinfeld episode where Kramer is protesting against the Post Office:

Kramer, handing out anti-mail pamphlets, with a dummy dressed as a mailman with a bucket on its head: “Here you go. Mail is evil. Pass it on. Hey, mail blows. Fax it to a friend.”
Woman: “Why does this dummy have a bucket on its head?”
Kramer: “Because we’re blind to their tyranny.”
Woman: “Then shouldn’t you be wearing the bucket?”
Kramer: “Yeah. Move along, Betty.”

Also reminds me of the “NOH8” campaign in California, marked by these sorts of pictures: 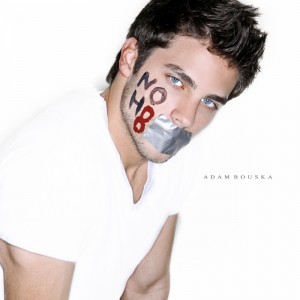 Now, I get the “NOH8” thing, and admire it from a marketing standpoint (even though I think it’s callously simplistic, unnecessarily antagonistic, and likely part of the reason that side lost, but nevertheless). What I don’t get is the tape over the mouth. Were gays in California being silenced? Their voices not being heard? I could imagine this would make sense if that were the case, but it wasn’t about gays being denied the right to vote or something like that. After all, it was a political campaign in the first place, and gay people were definitely being heard (I could hear them from overseas where I was deployed at the time!). And besides, as I recall, it was those in support of Prop 8 who was shouted down, belittled, called a “hater”, and otherwise shunned from polite conversation. Shouldn’t (as with Kramer) the tape have been on the other side’s mouth? Dunno how you’d put that into an ad campaign, though.

Anyway, nothing monumentous, just a random thought that came into my head today. See what happens on one of those rare Colorado days when it’s not sunny outside?

*We all know what happened last time!