With such indecorous language does Bruce Kesler join me in backing former HP CEO Carly Fiorina to replace Barbara “Call Me Ma’am” Boxer.

Still, he remains critical of the candidate, saying she sometimes “sounds like a script of platitudes, and she lacks the experience in government to be truly effective.”  Actually, I think her lack of experience in government works to her benefit.  She make take a few months to find her footing in Washington, but at least she’s not a creature of Washington.  She’s a smart lady.  Once she learns the ways of the Senate, she’ll be an effective force.  A most effective force.

And if we’re judging by experience, Mrs. Boxer with 28 years in Washington should be one of the most effective Senators.  Yet, she’s only managed to pass three bills in her eighteen years in the Senate.

. . . her platitudes are conservative, she has the ability to spit venom, and she has the funds and temper to take on Barbara Boxer. Barbara Boxer has no record to run on, despite several terms, except for being a reliable vote for whatever Democrat programs are on the floor.  If Fiorina wins, at least she should be a fairly reliable Republican vote in the US Senate.  And, it will take a rich bitch to down a rich bitch. Californiaelections require tens of millions to be a competitive candidate.

He doesn’t mince words, does he?  And he articulates one of my concerns about Tom Campbell:  he doesn’t seem to have what it takes for a rough-and-tumble campaign with Mrs. Boxer, one of the nastiest partisans in the business.  (So, read the whole thing.)

I met Carly tonight at an event for supporters after the debate.  To this very diverse crowd, Carly didn’t mince words either:  “We’re going to beat Barbara Boxer because she deserves to be beaten.” 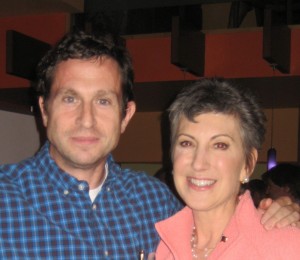