In the past few days, Nick and I have come to (metaphorical) blows over our difference son “Draw Mohammed Day.”  We did have a good conversation last night over the phone where we resolved, with each making a bit of sacrifice, to handle the situation as we did yesterday.

And since I think Nick is a swell fellow, when, before my drive went south (metaphorically not geographically) today, I called him to share an insight I was sure he would enjoy.  (It’s always nice to agree than disagree with your friends.)  Because of the connection, he didn’t hear everything I had to say, but he did get the gist of it.

So, now comfortably ensconced in my hotel, let me elaborate.  As our readers know, I take offense at Draw Mohammed Day because it gratuitously mocks religion — just as I have long taken offensive at the juvenile antics of the gay men who style themselves the “Sisters of Perpetual Indulgence,” dressing up as nuns and rollerblading around on Pride Day. 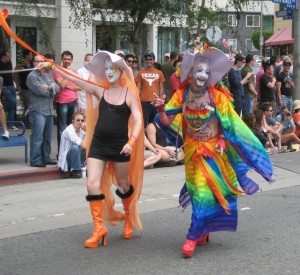 I wonder why is it that all too many in our community condone (celebrate even) this mockery of the Catholic faith, yet remain silent on a faith which persecutes people like us?  Why don’t we those who would mock Catholicism (whose extremists may judge homosexuality harshly), but refrain from mocking Islam (whose extremists murder homosexuals)?