Early Friday afternoon, after I rounded a bend heading east on I-80 in New Jersey, I looked up and saw the skyline of Manhattan and I smiled, recalling that almost exactly five days earlier — on the preceding Sunday, I had driven past the skyline of downtown Los Angeles as I headed east.

It was a pretty cool feeling, not diminished by the fact that this is now my eighth such trek across the country (so far three times round-trip and the drive I made when I moved to LA plus this one).

Of course, just a few minutes after looking forward to an early arrival at my sister’s, I encountered bumper-t0-bumper traffic leading up to the George Washington Bridge.  My sister had told me to tune into AM 1010 for traffic updates and I learned that I had a 30-minute wait.  Just about 28 minutes later, I pulled into the tollbooth.  Maybe 20 minutes after that I was with her family.

And while I didn’t have the time to stop and see the scenery as I had on past journeys, I did get to see family and friends, including my oldest nephew, now a Lieutenant in the Air Force as well as a friend from my College Republican days and a classmate from grad school.  I liked the combination of family as well as my political and mythological relationships.

Not to mention the chance I had to meet some of our readers in the Windy City.

The first time I did such a drive, I saw fewer friends and more scenery, discovering three national parks, Zion, Sequoia and Yosemite — and going on some pretty amazing hikes.

Today, I arrived at the hotel we had stayed for my eldest niece’s Bat Mitzvah in 2007.  I had hated the hotel back then.  This time, I just grinned and decided to bear it.  Turns out the woman who checked me in excelled in courtesy and efficiency.  She began by apologizing for the delay in checking me in (there had been a line).  And my room is larger than it was 2 1/2 years ago–plus my sister negotiated a better rate.

Anyway, despite the weirdness of my experience in Illinois and the traffic in Ohio, it was, on the whole, a good drive.  I filled nearly an entire digital recorder with ideas and thoughts, some for blog posts, others for my dissertation, still others random observations on culture and insights into mythology.

Now, that I’ve blogged all that, let me share a few pictures from the journey.  I didn’t have time to take as many as I would like.

This from the service station in Colorado where I filled up my car:

Stuck on the interstate in Ohio (note the open doors and people standing outside their cars): 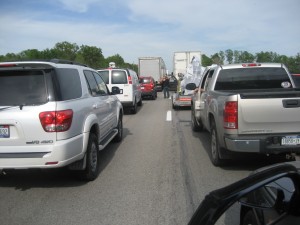 This from a diner in Pennsylvania: