From reader reports, we gain increasing evidence of a substantial homosexual presence at Tea Parties across the nation.  We have had evidence of openly gay and lesbian individuals participating in these anti-big government protests in Santa Monica, Los Angeles, San Francisco, Chicago, Boston, Charlottesville, Washington, D.C., Charlottesville and Philadelphia (as well as Pleasanton, CA).  And now comes even more evidence from the latest rally for freedom in that city of brotherly love.

On this blog alone (not to mention the gay people who have yet to alert us to their participation — or remain unfamiliar with our website), we have more evidence of gay participation in the Tea Parties than the mainstream media has provided of racism expressed there.  And yet they continue to peddle the latter narrative and ignore the former.

From our reader Matthew comes these photos from the Uni Tea Party this past weekend (yup that’s Andrew Breitbart with ’em): 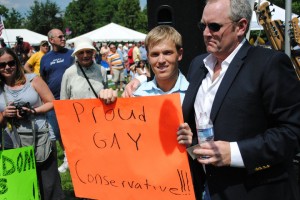 He also included this report:

. . . the individuals who did come to the event were friendly, compassionate, and had deep sense of appreciation and loyalty to our country and its constitution.

As a gay, politically active conservative, I had some hesitation in promoting my sexuality at this event. The general stereotype in the United States is that republicans and conservatives hate homosexuals, in that we are a threat to the moral fiber of American society. Moments after my friend and I arrived at Independence Mall, grasping our gay pride signs, conservative tea partiers began shaking our hands and taking photographs of us. They were thrilled that we chose to be representatives for gay conservatives across the country. I have never felt such appreciation and acceptance for being myself in my life. Many individuals had some sort of personal connection to a gay or lesbian in their lives, so they fully understood that just because a person is of a different sexuality, it does not qualify them from being a proud American citizen. Every conversation I had yesterday had a deeply personal element. In contrast to the acceptance and recognition I felt at the “uni-tea party”, I think of many different occasions that I have been eviscerated by fellow gays for my conservative political views. I have been compared to a Jewish person being a Nazi, and an African American being a slave owner. I have never been embraced or appreciated in the gay community for believing in limited government, the constitution, and personal liberty for all persons.

Why is this important? Well, there are several reasons but the simple fact that it is easier for me to be gay around conservatives, than it is to be conservative around gay is a very telling dynamic in showing how accepting conservatives are of everybody, regardless of race, sexual orientation, economic status, or political affiliation. Conservatives are independent patriotic individuals. As long as you agree with the basic platform of constitutional government, individual liberty’s, and a high sense of morality, then they welcome you with open hearts and arms. The conservative and tea party movements are not a conspiracy. Americans are losing their liberty and are scared to death. They feel like they are drowning and reaching out for help. Reaching out for someone, anybody at all, to pull them out of the frigid water. I know that if I were drowning, I would not care what race or sexual orientation the person saving me was. I would grab their hand and hold on for dear life. That my friends is what the American Tea Party movement is all about; Reaching out to our fellow citizens to help save our country. Anyone and anyone who can join hands with us can help save the United States of America from drowning.

Yesterday was one of the most liberating experiences of my life. I truly felt accepted for being a “Proud Gay Conservative”, and I thank you all for making me feel so welcome and at home within your movement.

Guess we won’t be seeing this story reach the mainstream media.  Just doesn’t fit the narrative.