I had planned to attend the rally Wednesday evening in West Hollywood to celebrate Judge Walker’s decision, but because Pajamas media asked me to write a piece on the ruling (and because work on that piece took longer than anticipated), I chose to stay home and complete it. (Hey, they’re paying me.)

Fortunately, while writing the piece, I was corresponding with reader Chris H who attended the rally. His report:

I got to rally about 630 just as Villaraigosa was starting the Spanish version of his speech. Chad Griffin gave pretty much the same speech he did on TV this afternoon. They also trotted out some of the lawyers. The speeches were the usual rehash and thank yous to everyone. The most interesting was Ted Olson who talked about how foolish the defense was during the trial and lightly touched on the constutional issues. Rally wrapped up at quarter to seven with them blaring Born in the USA. Crowd wasn’t too big…stretched from the stage at Robertson back to the swings at the play area. I think maybe 600 or so on a rough count but I’m not an expert at crowd estimation.

Based on what I read about the trial, I pretty much agree with Olson.  I have heard many sound arguments in favor of retaining the traditional understanding of marriage, few were considered at the trial.

I do believe that the strongest argument against state recognition of same-sex marriage is that the institution is rooted in sex difference.  In dismissing that difference, Walker was at his weakest, relying on 1960s mumbo-jumbo rather than actual scientific research.

I was struck by how small the crowd was (particularly compared to last May’s rally against the state Supreme Court decision upholding Prop 8).  Here’s one of Chris’ pictures: 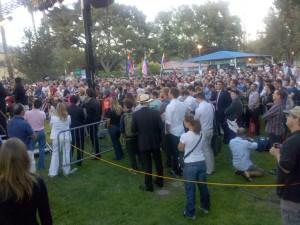 I do have a theory about the small turnout and it is most un-PC, so I won’t mention it here. At least not yet.