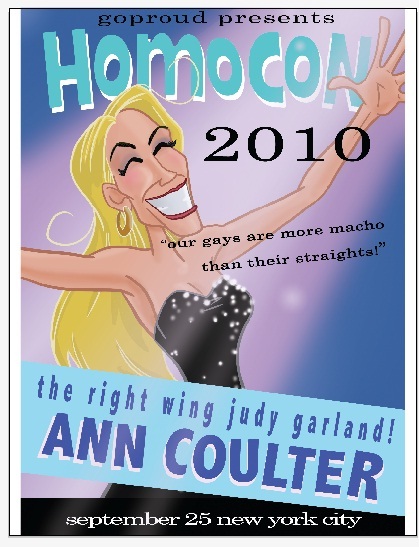 “The gay left has done their best to take all the fun out of politics, with their endless list of boycotts and protests. Homocon is going to be our annual effort to counter the ‘no fun police’ on the left,” said Christopher Barron, Chairman of the Board of GOProud. “I can’t think of any conservative more fun to headline our inaugural party then the self-professed ‘right-wing Judy Garland’ – Ann Coulter.”

Ann Coulter is the author of seven New York Times bestsellers —Guilty: Liberal Victims and Their Assault on America (January 2009); If Democrats Had Any Brains, They’d Be Republicans (October, 2007); Godless: The Church of Liberalism (June 2006); How to Talk to a Liberal (If You Must)(October, 2004); Treason: Liberal Treachery From the Cold War to the War on Terrorism (June 2003); Slander: Liberal Lies About the American Right (June 2002); and High Crimes and Misdemeanors: The Case Against Bill Clinton (August 1998).

Homocon 2010 will take place in New York City on the evening of Saturday September 25th. VIP Sponsorships are available for $2500 and general admission tickets go on sale August 20th. To purchase tickets or for more information: www.goproud.org.

“I can promise you, Homocon 2010 will be a hell of a lot more fun than chaining yourself to the White House fence,” concluded Barron.