The Rasmussen Reports daily Presidential Tracking Poll for Tuesday shows that 26% of the nation’s voters Strongly Approve of the way that Barack Obama is performing his role as president. Forty-five percent (45%) Strongly Disapprove, giving Obama a Presidential Approval Index rating of -19. 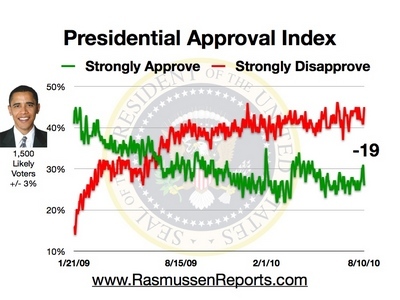 Sixteen percent (16%) give Congress good or excellent marks for their performance while 56% say poor. Republicans have a seven-point advantage on the Generic Congressional Ballot.

Most voters (58%) oppose having the federal government forgive a portion of mortgage debt for homeowners whose home is worth less than they owe. Sixty-three percent (63%) say such a plan would be unfair to those who are currently able to pay their mortgage. Those the proposal would theoretically help reject the idea of a federal bailout by a two-to-one margin.

Overall, 44% of voters say they at least somewhat approve of the president’s performance. Fifty-five percent (55%) disapprove. The Rasmussen Reports Media Meter shows that media coverage of President Obama has been 54% positive over the past week.

We are on the verge of taking America back from the Progressive/Socialists who hijacked America in 2008 with their bait-and-switch game.  No more Cloward.  No more Piven.  No more Alinsky.

For my own part I consider it as nothing less than a question of freedom or slavery; and in proportion to the magnitude of the subject ought to be the freedom of the debate. It is only in this way that we can hope to arrive at truth, and fulfill the great responsibility which we hold to God and our country. Should I keep back my opinions at such a time, through fear of giving offense, I should consider myself as guilty of treason towards my country, and of an act of disloyalty towards the majesty of heaven, which I revere above all earthly kings.

Is life so dear, or peace so sweet, as to be purchased at the price of chains and slavery? Forbid it, Almighty God! I know not what course others may take; but as for me, give me liberty, or give me death!