A reader decided to compare and contrast Republican men to their Democratic counterparts: 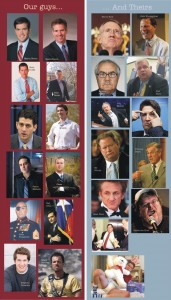