While completing work on my dissertation last fall, I found my mind sometimes wandering as I pondered two great issues, those of sex and of happiness.  As to the former, I continued my ongoing (and long-running) internal dialogue on where was the appropriate place for a single man to draw the line on sexual activity.  As to the latter, I noticed that on days when I was most productive, I usually felt happier than on those when I slacked off.

And as I drove around neighborhoods adjacent to my own where creative artistic types, many sporting tattoos on their incompletely covered bodies, live in close proximity to Hasidic Jews, most wearing near identical clothing almost entirely covering entire bodies (save their faces), I wondered if those who adopt more constraints on their clothing (as well as their personal appearance) could be as happy as those who have eschewed such religious constraints and dress however they please.

While I have been reminding myself to blog on these topics (and the intersection thereof) since I successfully defended my dissertation, this week it seems the universe has been reminding me as much.  While browsing at Barnes & Noble, I caught site of this display table, featuring books on happiness: 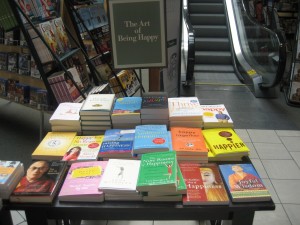 Then, this week, Memeorandum linked Ross Douthat’s column on monogamy where he wrote about research suggesting a “significant correlation between sexual restraint and emotional well-being, between monogamy and happiness“.  Later, Glenn Reynolds linked Douthat’s followup post where the Times columnist noted that in the wake of the sexual revolution:

Female happiness has dropped since the 1970s, despite enormous female economic gains. Marital happiness has dipped as well, even though fewer people get married and it’s easier to leave an unhappy union.

It would be interesting if such studies have been carried on gay people as well as straight ones.  All that said, for now, I have as many questions as I have answers.  I have found a correlation between hard work and emotional well-being.  I have also noticed that over-sexed people tend to be as crabby as under-sexed ones.  And that those who find a just mean (as it were) do seem to enjoy a greater sense of emotional well-being.

The challenge, it would seem is finding that “just mean.”