We report, you decide.

2008 was a good year for Barack Obama. He won the election and became the first black president, after all. And even though it’s now 2011, it seems 2008 is still at the forefront of Obama’s mind. See, while on his state visit in London today, Obama signed the guest book at the famed Westminster Abbey, but he didn’t date it May 24, 2011 — instead he put “24 May 2008”

File this under: “If Bush Had Done This…”

When will someone in the media start telling the truth — Obama at best is an ultra lightweight in the brains department. 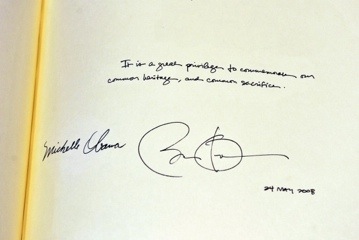 UPDATE (from Dan): Bruce, I caught that too and wondered if Obama were reliving his glory days of 2008, when he could campaign as the outsider militating for change, always running against George W. Bush, never defending his own record. The president, I believe, is living in the past. (Here, while both taking note of the error, Bruce and I offer very different interpretations. Had I posted first on this, I would have used a different title, something involving “Glory Days.”)