Earlier this month, I walked down Melrose, a once bustling commercial thoroughfare in Hollywood, and snapped pictures of the numerous MOWBs (PF) Moonbeam-Obama-Waxman-Boxers (Pavley–Feuer), those empty storefronts ubiquitous in Southern California: 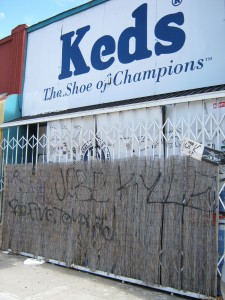 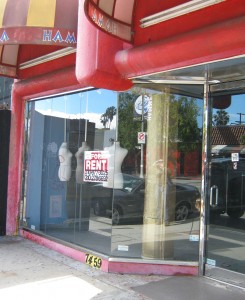 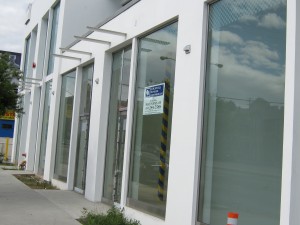 Yesterday, Glenn Reynolds linked a post that provided statistics to back up observations to back up my observations, Companies Leaving California In Record Numbers: last year, an average of 3.9 businesses left the (once-)Golden State every week. So far, this year, it’s 5.4.

WIth businesses fleeing to such states as Texas, Arizona, Colorado, Nevada, Utah, Virginia and North Carolina, you’d think our legislature would consider bills to reduce the burdens the state imposes on private enterprise, but instead reports Joseph Vranich, the legislature has rejected “business-friendly legislation and Sacramento’s implementation of additional regulation“. No wonder he fears that “California’s hostility towards business will only worsen.” Guess we’ll soon be seeing even more MOWB (PF)s like those above.