In some ways, I had five grandmothers, my mother’s mother, my father’s mother whom I knew only through stories (she died long before I was born) his step-mother, my Nonny, always a devoted grandmother, my beloved Aunt Ruth, my maternal grandmother’s older sister, and Curly Tunick who worked as a rental agent for my Dad from when he built his first large apartment complex until she was in her 80s.

Curly died yesterday just shy of her 100th birthday. She and I always had a special bond almost from the time my Dad hired her. She says she first remembers me crying about something. I would have been about two. She must have told a crazy joke and quieted me down.

I used to treasure going to my father’s office and walking up the hill to where she worked in the model apartment. Sometimes I’d even go with her when she showed units to potential renters. She had this way of telling whether people were just checking things out or were serious about renting. As I grew older, she used some rather, shall we say, colorful terms to describe those who were just passing the time — or dispatched by representatives of my father’s competitors.

And she had a zest for life, cracking jokes, speaking her mind. I think her husband was a bookie, but I never really knew. And although she had endured her share of adversity, with her father, brother, husband and daughter dying within months of each other, she always seemed to be smiling, savoring every minute of her life. This is one of the last pictures taken of her and me when I visited her last May in Atlanta. In every picture in that set she was smiling — as she is smiling in my every memory of her — in all save one. 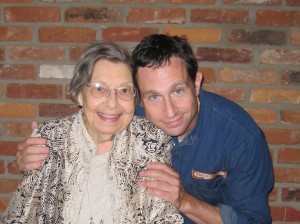 When I was maybe seven years old, before I knew better, I asked her how old she was. “Thirty,” she replied. I never thought to question that, but wondered how a woman with a grandson six months older than me could have managed that feat. I was pretty good at math, so tried to figure it out, even when, well, simple subtraction and division made her and her daughter mothers before they were twelve.

But, since Curly said she was thirty, then thirty she was. And if it were possible, Curly Tunick could make it happen.

When she worked for my Dad, she had a lot of “bingos” at Lakeshore Drive Apartments in Cincinnati. A bingo was when she rented every apartment in the complex. I used to joke that she would die when showing an apartment.  When she retired, the complex started losing money.

I don’t think my Dad could have built his business without Curly. She was even showing apartments after a tornado in 1969 ripped the roof off nearly every building in the complex. She could see beyond the momentary damage and imagine how wonderful things would be as soon as repairs were made.

I know her life had been far from easy, but she never complained, well, save the way some women do about their diets.

She was devoted to her family, adored by her two eldest grandchildren. And she became part of ours, delighting to look at pictures of my siblings and their children on my laptop the last time I saw her. Well into her 80s, she moved from Cincinnati to Atlanta to be with her granddaughter — and her great-grandchildren (putting their happiness ahead of my father’s business!).

When she talked about her grandchildren — and great-grandchildren, her eyes sparkled. She loved bragging about her grandson, now a successful attorney at a major Chicago law firm. The only time I ever saw her without a smile on her face was when she was setting off to visit his dying mother in a hospital.

No one knows how she managed to bear that grief, her beloved daughter dying so young. And it came so close to the deaths of many dear to her. Yet, Curly Tunick never gave in to grief or despair. When I came out to her, she replied by articulating her philosophy of life. “You only go ’round once,” she said, so make the most of this life while you’re here. Live it as seems best to you. Don’t let others tell you how to live your life.

Despite her many setbacks, Curly Tunick did just that. She had one heckuva ride. And I’m glad to have been part of it.