Yesterday, the editors of the Wall Street Journal cited

. . . a remarkable Gallup poll this week that asked the public about its views of government and various businesses. The federal government dropped to its lowest approval levels ever. Only 17% were positive, 63% negative, for a net approval rating of minus-46%. Government never ranks well, but for the first time since Gallup began asking in 2003 it fell to last place—below even the oil and gas industry, which netted minus-44% approval.

This wasn’t the only survey showing a decline of public confidence in the federal government. Such surveys, they contend, reflect “the historical pattern of modern American politics: Every time Democrats attempt to govern the country from the ideological left, they damage government’s reputation and status.” 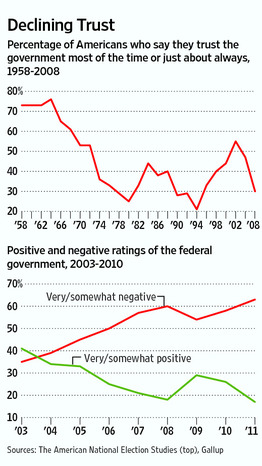 Interesting that confidence in the federal government peaked in the immediate aftermath of 9/11.

“The lesson,” the editors conclude, “is that public trust in government is highest when Washington is retreating from the broad spending, tax and regulatory agenda that prevailed in the late 1960s, 1970s, early 1990s and now today.”