Can you imagine a periodical billed as a news magazine with a cover interview with a Republican leader conducted by a man who advised said leader? 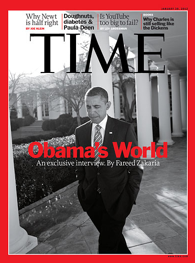 Now of the Obama apologists, Fareed Zakaria perhaps has the broadest world view — and does occasionally show respect for conservative interlocutors and understanding of conservative ideas.  But, aware that in the same segment of one television show, the pundit has gone from acknowledging he advised Obama on foreign policy to praising Obama on foreign policy (for taking his advice?), I am less likely to take his as an even-handed account.

Explaining why she didn’t read a cover story on another one-time news magazine, Ann Althouse articulates my reasons for not reading this one:

Another way of putting that is: I have a life. I can’t read everything. Generally, I scan the web in the morning and find some things that feel bloggable to me. Today, it was the Newsweek cover photo and headline, and that’s what I wrote about. Writing about the headline, I had the reaction that it doesn’t work on me. It doesn’t make me want to read. It’s insulting! That is a journalistic failure by Newsweek.

Read the whole thing.  And if you, like me, like the way that diva writes, read this too.

For the record, my subscription to Time is not by choice.  When U.S. News and World Report ceased publication (of its physical magazine), subscribers to that journal (including yours truly) received its one-time rival for the balance of their subscription.  Despite multiple pleas from that renew to “renew”, I have no intention of doing so — even if the cost is the same as Sidney Harmon paid for Newsweek.