Four days ago, I posted a picture of the prices at the Shell station at the corner of Fairfax and Beverly in Los Angeles–one of the cheapest places to get gas in the Hollywood area.  Then, a gallon of regular was $3.93.  Here’s a picture of the same sign taken four days later: 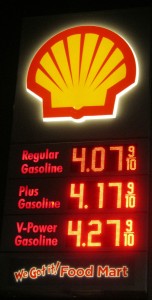 Up 14 cents in just 4 days. No wonder the AP is reporting that “Gasoline prices have never been higher this time of the year“:

Since they’re already approaching that level in LA this week, seems that it’ll cost us more than $5 to buy a gallon of gas come Memorial Day. And then some.

First, Obama, like all right-thinking greenies, want gasoline prices to be higher, though, to be sure, they want high prices brought about by a government tax rather than the marketplace.  High gas prices are no fun if it means more profits for private oil companies.  Obama admitted this directly when asked about high gas prices in 2008, when he said he didn’t have a problem with them, only that he “would have preferred a gradual adjustment.”  Well, prices have crept up gradually since they collapsed back to about $2 a gallon in 2008.  So what’s his problem?

Read the whole thing for his analysis of how gas prices relate to presidential approval.