I picture I took yesterday afternoon at the Shell station on the corner of Fairfax & Beverly (one of the least expensive places to fill up in Hollywood):

A reminder of the same spot 8 days previously: 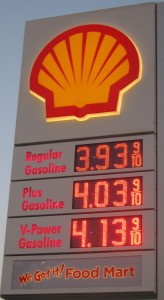