Just shy of a year ago, I posted some pictures I took of empty storefronts on Melrose between Fairfax and La Brea.  Today, I chose just one block, this time west of Fairfax and found on the north side of the street (Melrose) between Edinburgh and Highland exactly as many empty storefronts as occupied ones:

If entrepreneurs weren’t vacating these stores, they could be paying taxes to the state of California, helping reduce it’s deficit while providing jobs for aspiring actors — and other Hollywood wannabes.

The very state policies which cause these enterprises to go belly-up account to a large degree for the state’s slumping revenues.  California has become one of the nation’s least-friendly states for small business.

As Jennifer Rubin puts it:

. . . unless you understand that California has the worst business climate in the country and its revenue projections turned out to be wildly over-optimistic. Reuters explains: “The deeper deficit forecast reflects the state’s uneven economic recovery: tax collections this year have fallen about $4 billion below projections, though many state legislators and economists had warned that the January revenue estimates were far too optimistic.”

And tax collections will continue to fall unless state legislators act to reduce the regulatory burden and adopt a more business-friendly tax structure. That alas does not seem to be on Governor Brown’s agenda.

Oh, and the south side of that block also has its share of vacant storefronts: 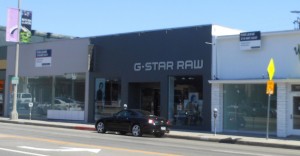 ADDENDUM: California gets an “F” for its tax code. And one thing Jerry Brown is proposing would only serve to raise taxes. The Democrat’s solution would only exacerbate the problem.